Shook Twins: All Shook Up
By jennifer mandaville | photos by alan scheckter

She walks freely through the farm missing feathers from her plume
Pushed from the flock she knows so she eats alone
Best friend on her own
And does she know that she has a soul?
And does she know where we all go?
-Shook Twins, “Rose”

Sibling acts are a thing for me right now. It started in 2015 while watching the harmonious Brothers Comatose rip it up at Ouray Colorado’s Mountain Air Festival, and was followed the next summer at the Rocky Mountain Folks Festival in Lyons, Colorado, with an amazing showing by jazzy-improv-folk-trio: The Wood Brothers.

Naturally, I was drawn to another sibling group: Shook Twins, who happened to play with both brother bands in the past year.

Shook Twins played at the Four Corners Folk Festival in Pagosa Springs, Colorado in 2014, and I was lucky enough to see them in all of their beat-boxing, golden-egg glory. Identical twins tend to capture attention, but with Shook, it is their distinctive jam-folk eclectic style and ongoing reinvention of both music and sound that cause one to settle in for the ride.

Neil Gaiman of the New York Times, sums up the sister-sound as:  “… the dreamlike songs that seem somehow permeated by the American folk tradition, without actually being part of it.

“They make music that twines through your soul the way vines cover an abandoned shack in the woods.”

As I sat watching them on a sultry late summer afternoon, I was curious and captured by what was so obviously special about these sisters.

Born and raised in Sandpoint, Idaho, Shook Twins now call Portland, Oregon home-base. Sisters Katelyn and Laurie are both songwriters, and a key element to Shook Twins’ sound is their unique and varied instrument jubilation: banjo, acoustic and electric guitars, electric bass, mandolin, electronic drums, face drum (beat-box), glockenspiel, ukulele, banjo-head drumming and their signature Golden Egg. Their vocals combine with both acoustic and electric instrumentation, and the group describes their sound as “a unique and eccentric blend of folk, roots, groove and soul.”

I had a chance to talk to Laurie and she revealed aspects of their writing projects, and while both Katelyn and Laurie write, more often than not it is Katelyn’s writing that makes the final cut … “mine tend to get vetoed” she shares, laughing.

Shook Twins are finishing up a current album project, Laurie said. “We had a chance to rent our friend’s Airbnb in SE Portland for five days on two different occasions because, if we try to work from home, I find Katelyn trying to vacuum! So, we treated this album like a job … we woke up and started by 10 in the morning. We’d have all of our equipment set up in a circle in the living room, eat breakfast and sit down until something came ‒ working on an idea that grabs us and makes us feel things, and then work on it and work on it until we’d finish a song a day. … It felt so great! I mean it was like taking a creative shit and felt so good to get something accomplished!” And while Laurie admits that either the lyrics or music can come first, usually it is the music. “It can happen really fast sometimes; it is so cool how things literally fall out of the air!”

Laurie ~ “I think of something really cool that is swirling above me in Portland, and I tap into people who I respect and whose words and music make me feel things. … I think of my dear friends, so many of them have that kind of creativity and I see it above me, and I just breathe it in and kind of clear my mind and it just falls out in front of me.

The year-long album project was ultimately mixed at Hallowed Halls ‒ “Portland’s most unique recording studio” according to Willamette Weekly ‒ located in an almost 100 year-old Carnegie Library in S. E. Portland. Laurie admits that recording live in a circle of rooms with earphones is not normal for them, “It is something we have always wanted to do … it feels more organic and a better representation of how we do it live.” 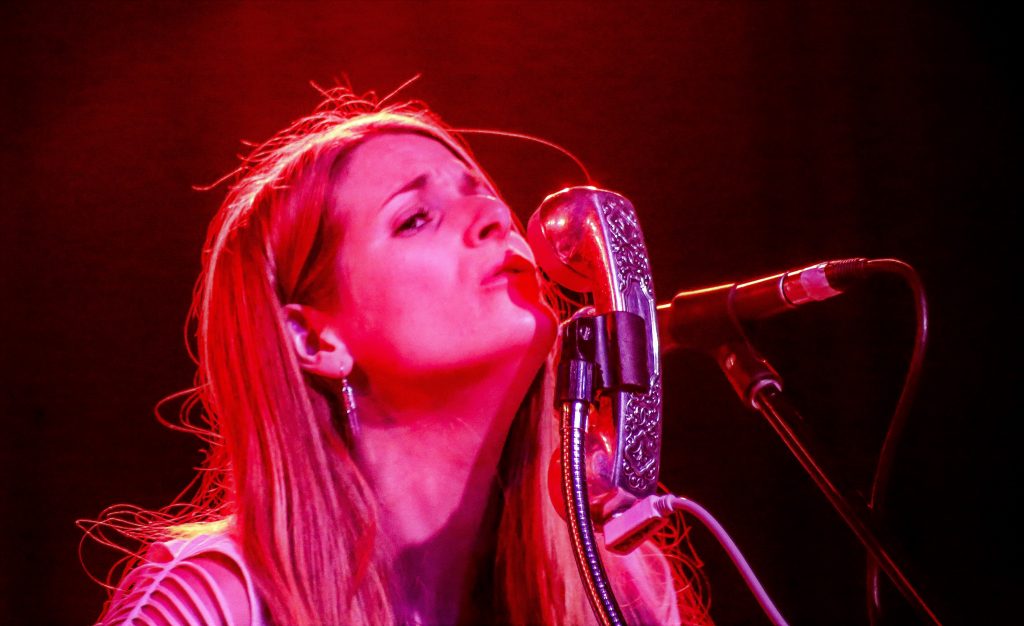 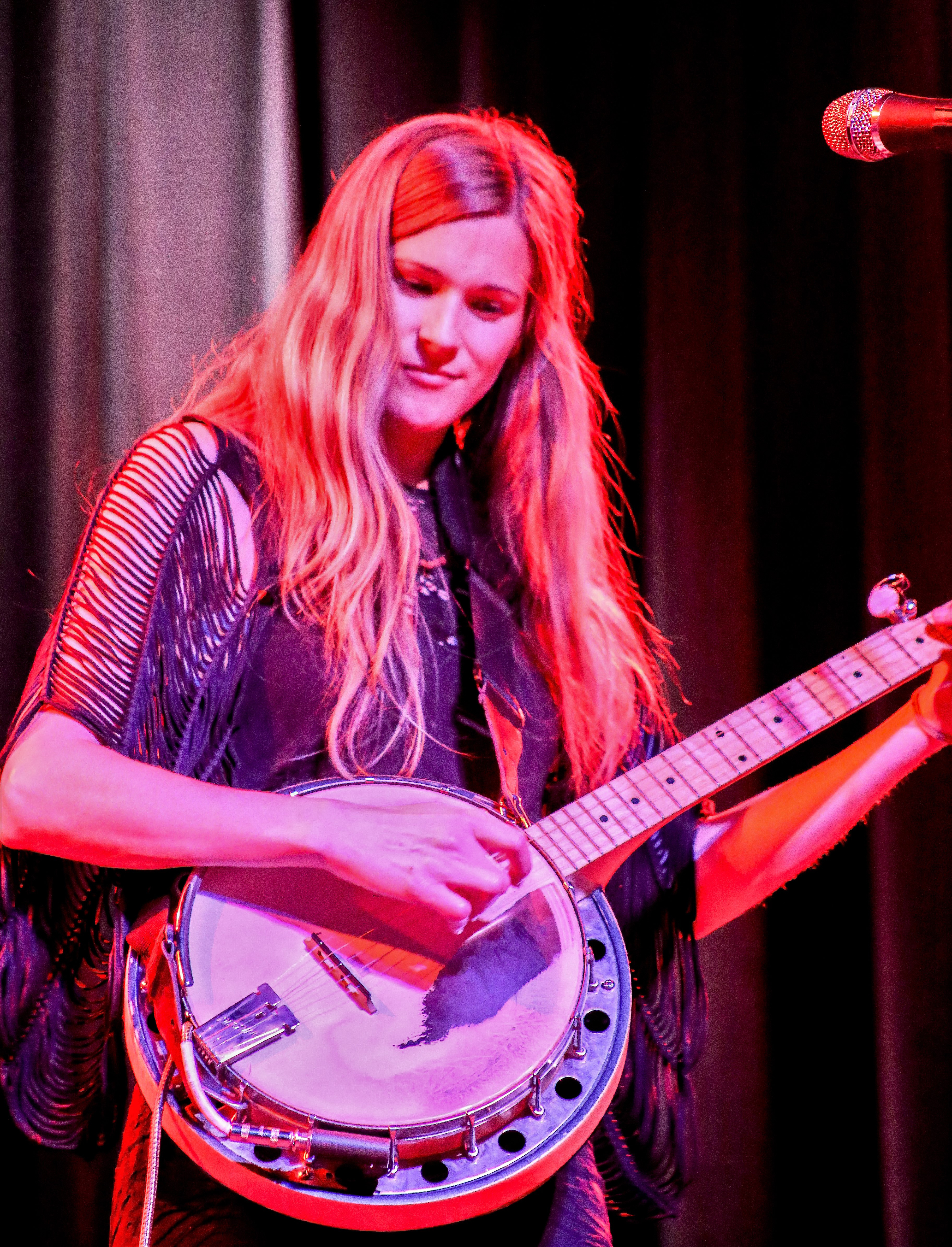 The sisters, are backed up by band member Niko Slice, playing electric guitar, mandolin, and adding his song and sound to the mix. Barra Brown is on drums, vocals and drum pad, and Josh Simon is on bass, vocals, electric guitar, and synth. “It finally jelled and we have the band that we are going to be with for the long-haul. It is so cool to be tight enough and have the capacity to just play the album live.”

The band is in the process of looking for a mid-sized indie label and, therefore, are not looking to release right away.

Talking to Laurie, she says that their sound is, “a conglomeration of all the influences that make us feel things. We are big fans of down-tempo, ambient electronic ‒ Bjork, Emancipators … also just a guitar and vocals, simple harmonies … really stripping it down. Bjork has that electronic eerie mysterious sound that is really cool.”

The sisters Shook decided a career music was their path after college, though they started writing in high school. “We went to college and wrote songs there,” Laurie continues, “but we both earned our degrees in Radio, Television and Digital Productions. We were sure we wanted to be the host of a Travel Channel show called Travel Twins!” But the twins ended up hating TV in general. “We went back home and lived in the house behind our parents’ house and kept playing music. We had a weekly gig at a wine bar and kept doing it. We kept getting better and never did anything else.”

Shook Twins have played with The Indigo Girls and Elephant Revival and have opened for David Grisman, The Brothers Comatose and The Wood Brothers. “It is so cool to warm up a crowd before one of your favorite artists. People that come to these shows are so wonderful and so respectful … we love opening for artists like that because they get a lot of respect from their fans and we get some of that.

“Most of the time we get to go on stage and collaborate with them. Standing up there, looking at your heroes is a surreal thing.”

And while those acts hold a special place in the band’s heart, an epic highlight was opening for Ani Difranco at Red Rocks. “She is a huge influence on us. We have been following her since we were 12 years old. She turned us onto poetic song writing and words that really mean something.”

When I asked the twins if there was something that perhaps we didn’t know that they might like to share, they start giggling, “A funny thing is we do have our own record label and we release our records on Curly Pinkie Records and that is because Katelyn and I can’t straighten our pinkies.”